Cheap folding exercise bikes that are of decent quality are hard to find which is probably why the Ultrasport F-Bike has long been one of the hottest selling folding bikes for the last couple of years.

As we now live in a world where more and more people want to work out from the comfort and safety of their own home, we thought it was about time we re-visited the F-Bike and its various iterations to see whether it still stacks up as a viable home cardio option.

It wasn’t easy, but we managed to get our hands on three different F-Bike models and having tested them for a good few weeks we now bring you our full Ultrasport F-Bike review.

About The Ultrasport F Bike 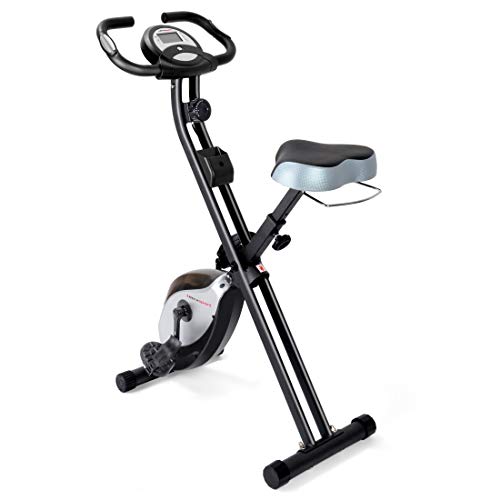 The F-Bike is the standard by which we have judged most compact exercise bikes whenever we have reviewed them, purely because they have always stacked up well in terms of user experience, level of challenge, reliability and of course cost. The F-Bike is not trying to be the greatest exercise bike of all time, but instead it aims to strike a good level of balance between affordability and usability.

What Ultrasport have achieved since the success of the original bike is to launch a range of variants that cater for slightly different needs and various levels of challenge. So, whereas some models used to be limiting for some users, these days there should be an Ultrasport model that suits most people.

It is the Ultrasport F-Bike 150 that sets the standard by which most people judge the variants and for the purposes of this F Bike review we will focus on the 150 and then give a full overview of what to expect with the various models.

The build quality of the F Bike is impressive for something that comes in at such a budget price. It is also one of the most compact exercise bikes available, measuring up at just 30cm x 40cm x 142cm when folded. The dimensions when in use make it a little more noticeable with it standing at 80cm (l) x 45cm (w) x 121cm (h). It’s not the biggest bike you have ever seen when being used but it is large enough to have a good level of stability.

With 8 levels of magnetic resistance there is also plenty of challenge for users of different abilities. The level of challenge afforded is going to be more suitable for beginner and intermediate users but this is very much the target market for this model. 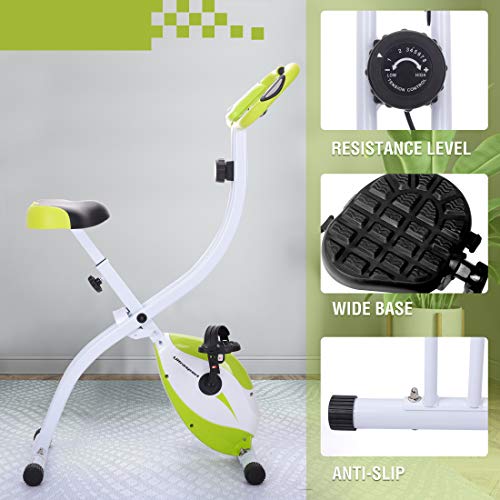 The maximum user weight of the F-Bike 150 is 100kg (other models have different maximum weight capacities) and although this is not the most robust in terms of the amount of weight it can hold, it is still better than some other low priced exercise bikes. The bike itself weighs in at just 18kg which makes it ideal for moving around and easy to store out of sight.

The build quality that Ultrasport have opted for is pretty impressive. Everything from the wide base to the oversized handles and pedals feel well made and with the models we tested there were no issues with the bike not feeling stable. The seat is perhaps the least satisfying element of the bike but this can be easily overcome with a padded gel seat cover (which we would highly recommend). The handle bars feature a good amount of anti-perspiration padding and the oversized nature of these means you have multiple grip options which will suit all styles of rider.

The F-Bike even has built in pulse sensors which seems to be the standard these days for mid to high priced bikes, but with more and more budget priced exercise bikes also coming with heart rate tech, this worthwhile addition to the Ultrasport models mean they still hold their own against newer models.

The only power that is needed for the F-Bike is for the LCD display and this is generated by a couple of batteries. This is an important feature to take note of as it means you can locate the F-Bike wherever you like and aren’t limited to being near to plug sockets. The display itself looks good but is pretty basic in its design. It gives you the key readouts you would expect to find, including time, speed, calories burned, distance covered as well as your heart rate reading from the pulse rate sensors.

Ultrasport have created add-on accessories to take the functionality of the bike a little further with the multimedia device holder and comfort gel saddle insert being the best options to provide extra entertainment and comfort to your workout.

We used the F-Bike 150, F-Bike Heavy and F-Bike 200B in our testing and we found all models to have the same basic functionality and design principles. We will go in to each model in a little more depth shortly but the main differences between the models was that the F-Bike Heavy can hold up to 130kg of user weight while the 200B has an added back rest which makes transforms this model in to an almost semi-recumbent bike. 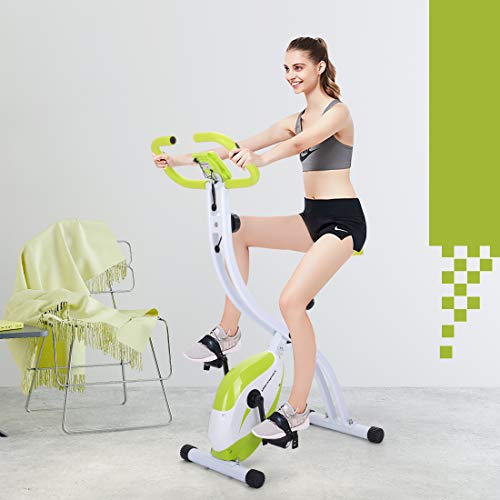 The best thing about the F-Bike series is that they provide an accessible workout both in terms of cost and usability. Most people that are new to exercise bikes will find the Ultrasport series an ideal choice and for many it will be their first foray in to home cardio workouts. One of the biggest appeals of this sort of fold down exercise bike is how easy it is to store – so you don’t need a dedicated workout space to use it. That being said, you will need some space to workout, but you can easily store this bike under a bed and then carry it downstairs to workout in your living room – exercise doesn’t get much more accessible than that!

Most aspects of the F-Bike are either adequate or very satisfying. Unless you are planning rides that last over an hour (and most people won’t be) then this exercise bike will more than suffice. It’s not going to win many awards for its looks and its functionality is limited – but it is still more than enough for most. Ultrasport have done what we like to see all budget fitness equipment manufacturers do – and that is to put the emphasis on the key components and not just add gimmicks to pass off as extra functionality. This results in a basic exercise bike that works well in terms of its primary function.

Let’s take a look at some of our key F-Bike review points:

Resistance – Don’t be fooled by there being just 8 levels of magnetic resistance on the F-Bike models. Although this is at the lower end when it comes to levels of resistance, the actual full range of difficulty is pretty big. Many models have 16 levels of resistance or more with small incremental differences (some of which are hardly noticeable). But with the F-Bike there are 8 well balanced increments with the hardest setting likely to test most users other than those who are highly experienced or extremely fit. The resistance is controlled by a manual dial found just below the handlebars – this is well placed, easy to adjust and can be controlled mid-ride quite easily.

Comfort – The overall comfort provided by the F-Bike series is good. The seat on the F-Bike 150 is not as good as the Heavy and 200B models (with the latter providing a back rest and the former having extra padding) but this can easily be overcome with a gel pad seat cover. The touch points of these bikes are excellent with non-slip pedals and the handlebars all being ideally constructed with comfortable materials. The bike has an adjustable height seat but there is no way of adjusting the handlebars which means anyone over 6’2″ might struggle with it in terms of ride comfort but anyone under that and over 5’4″ should have no issues.

Stability – Perhaps the most surprising element of the F-Bike series is how stable these bikes are. Considering the lightweight build and the budget price you might be forgiven for thinking that these bikes would not be particularly solid or stable – and this would be incorrect on both fronts. One of the reasons that Ultrasport have had such success with these models over the years is thanks to the rock solid stability that they provide – and this still sees them ahead of most other bikes at this price point. Even when riding at high speed, the F-Bike still remains very stable and you are never in fear of falling off.

Features – The F-Bike is less about features and more about providing a good challenging ride in a stable and secure way. That being said, the pulse rate sensors are a good addition and provide that extra bit of functionality. We found them to work pretty well and although they weren’t as responsive as you might expect a polar heart rate monitor to be, they still provide an accurate readout and can help you to train at your target heart rate. The main feature of these bikes is that they fold away and they do this incredibly well.

Let’s take a look at the key differences between the other 3 variations of Ultrasport F-Bikes that we reviewed:

F-Bike 150 – This is what we focused on predominantly through this review. It holds 100kg of user weight, has 8 levels of magnetic resistance and is super lightweight and easy to store. A great budget bike, just be sure to grab a padded gel seat cover.

F-Bike Heavy – The key features that change with this model is that it can hold up to 130kg of user weight so anyone over 100kg should opt for this model. It also has a larger and better padded seat and you can get away with not buying the extra seat cover for this model. There is also a handy mobile phone holder on the main handlebar stem of the bike.

F-Bike 200B – The key difference here is the semi-recumbent design. You are still sat upright but you do get the oversized seat with the added back rest. This is useful for users who need extra support for their backs but those needing a fully recumbent bike should check our recumbent exercise bike buyers guide.

If you are looking for a good quality, cheap exercise bike for daily use then the Ultrasport F-Bike is a good investment.

Equipment 0
Disclaimer
We are a participant in the Amazon Services LLC Associates Program, an affiliate advertising program designed to provide a means for us to earn fees by linking to Amazon.co.uk and affiliated sites. As an Amazon Associate we earn from qualifying purchases.